RBA, RDTA, RTA – what are the differences between them? 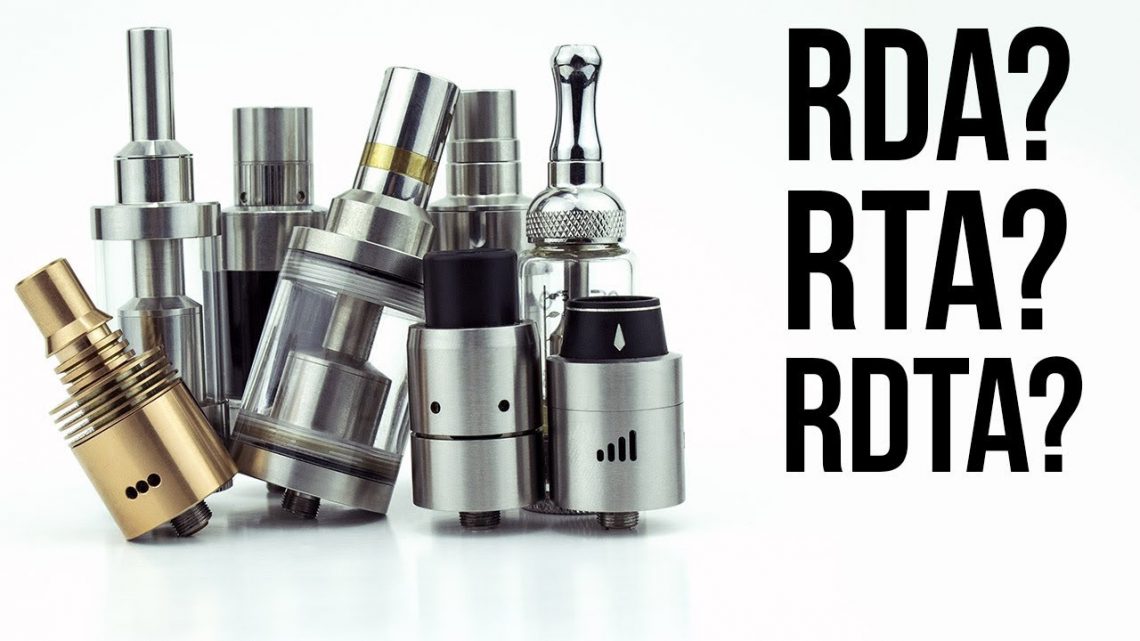 If you don’t ask, you won’t find out! In the case of e-cigarettes it’s better to just don’t buy something that will most likely not meet your expectations and will force you to spend even more money.

These terms are used by vaping shops to describe what kind of atomizer it is. More advanced users are usually able to determine the type of atomizer by its very appearance and its design, but beginners have to read and memorize the meaning of these words in order to not get fooled and to not lose even more money as a result. You can always just read this definitive guide to the best E-cigs if you don’t want to get into the technical details, but please do mind that the time will come when you’re going to need some knowledge of how vapes work to enjoy them.

Which atomizer should I choose?

There aren’t really any bad atomizers, there are only bad choices made by the newcomers, most often completely not adjusted to expectations and individual needs. Each of the above mentioned types of atomizers

has certain special features and has a different structure to achieve a different vaping experience.

Beginner vaper should look for an atomizer, which:

– Is easy to use and no Swiss precision is required to assemble it,

– Replacement of the glass or the gasket doesn’t require a trip to China,

– The taste and the cloud are at least decent

Considering the number of all the atomizers available for sale right now, it’s difficult to decide on something that will meet all of the above mentioned requirements, and if, in addition, we’re going to have problems with terminology, it turns out that our only salvation is the seller (but we don’t have the same taste buds and and the same needs when it comes to vaping). Okay, so what do these weird-sounding words mean? RBA, RDTA, RTA? What’s that?

RBA – let’s start from the beginning

Using the definition from the dictionary, we can say that RBA is a ReBuildable Atomizer that has a base on which you can install your own, hand-made heater. We have to realize that one of the most elementary information about the atomizers – there are atomizers for ready-made heaters and atomizers with a base, which forces the user to install a hand-made heater.

Coming back to the very short summary – if the atomizer that you want to buy has been marked as RBA, you can be sure that it will require the use of hand-made heaters, with some small exceptions that is, because there are evaporators with their own heaters, which also have the ability to work with the products available in vaping stores – so it’s a hybrid for all of you undecided ones.

RTA, or Rebuildable Tank Atomizer (RTA) are evaporators that have a liquid tank and an RBA base (allowing you to install your own heaters). They have been described as versatile and universal not without any good reason. They are a perfect solution in situations where we don’t want to take a bottle of liquid with us when leaving home and it is troublesome to sprinkle the heater every time we want to vape. Thanks to the fact that the RTAs have their own liquid tanks, which can often contain even 6 ml of vape juice, which gives many vapers the possibility of peaceful vaping for several hours without any worries about the juice. The tank is filled simply by unscrewing its parts and the vape juice is transported to the heater thanks to law of gravity and continuous contact of the carrier (cotton) with the vape juice in the tank.

Until recently, it was said that RTA evaporators don’t taste as good as the RDAs, but the latest designs show that some of them can start competing with drippers (RDA) in terms of the taste quality.

RDA – for all of you flavour seekers out there

It’s also a type of RBA evaporator, but it differs from RTAs in terms of design and usage. RDA (Rebuildable Dripping Atomizer), as the name suggests, forces the user to soak the heater with vape juice. This task was made even easier by quick access to the heater, through the unscrewing the upper cap of the atomizer. The design of the RDA Atomizers does not include a liquid tank, but you can expect at least some small chambers, capable of holding up to 1 ml of liquid. You can, however, partially eliminate this problem by purchasing a squonker, a device with a large liquid container, which, after squeezing, soaks the heater through the “pin 510” channel, directly to the heart of the atomizer.

It’s also worth mentioning that drippers are famous for their excellent taste and the fact that they can produce gigantic clouds. In their basic version, however, they are impractical and eliminate the vaping freedom offered by RTA evaporators.

RDTA – a combination of RTA and the RDA

Somebody brilliant, seemingly, came up with the idea that it’s the time to build an evaporator which would facilitate the

functionality known from the RTAs (the liquid tank) with the taste sensations offered by the RDA. TADAM – this is how RDTA was created, which can be used in the same way as the classic drippers, thanks to the easily removable upper cover, which allows for easy dropping of the vape juice straight to the heater, having at the same time a liquid tank below the heater, which constantly soaks the heater with vape juice which results in its constant readiness.

Sounds great, but does it do its job? You have to judge it for yourself, in my opinion, it doesn’t give that many new possibilities and I would prefer to have two separate devices to get the maximum benefit from their differences. This doesn’t mean, however, that RDTA has no raison d’être, maybe there will be vapers who will appreciate their qualities.